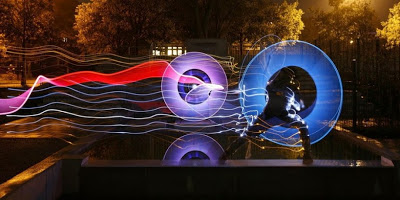 Light graffiti also called light writing, light painting, and light art is simply long exposure photography using lights to create objects and add effects into the photo that are not actually there in real life. It is a photographic technique in which exposures are made usually at night or in a darkened room by moving a hand-held light source or by moving the camera. 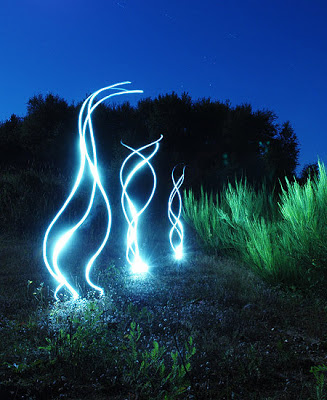 By moving the light source, the light can be used to selectively illuminate parts of the subject or to "paint" a picture by shining it directly into the camera lens. Light painting requires a slow shutter speed, usually a second or more. Light painting can be done interactively using a webcam. The painted image can already be seen while drawing by using a monitor or projector. Another technique used in the creation of light art is the projection of images on to irregular surfaces (faces, bodies, buildings etc.), in effect "painting" them with light. A photograph or other fixed portrayal of the resulting image is then made. 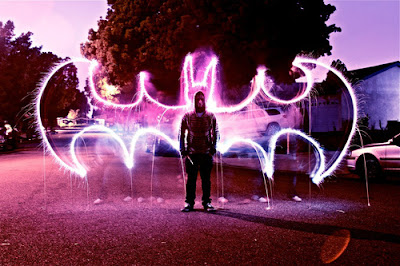 A variety of light sources can be used, ranging from simple flashlights to dedicated devices which use a fiber optic light pen. Other sources of light including candles, matches, fireworks, lighter flints and glow sticks are also popular. A tripod is usually necessary due to the long exposure times involved. Alternatively, the camera may be placed on or braced against a table or other solid support. A shutter release cable or self timer is generally employed in order to minimize camera shake. Color Gels can also be used to color the light sources.